“We must all learn to live together as brothers or
we will all perish together as fools.
We are tied together in the single garment of destiny,
caught in an inescapable network of mutuality.”
~ Dr. Martin Luther King, Jr.

Happy Martin Luther King Day! I’m glad we honour Dr. King and keep his legacy alive. A hero to many, and also one of my mentors, he showed us the incredible power of a dream and what can be accomplished with nonviolence. 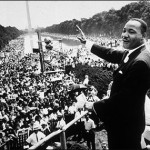 “The nonviolent approach does not immediately change the heart of the oppressor. It first does something to the hearts and souls of those committed to it. It gives them new self-respect; it calls up resources of strength and courage that they did not know they had. Finally it reaches the opponent and so stirs his conscience that reconciliation becomes a reality.”

We’ve certainly created change since the Freedom Riders rode the buses and Rosa Parks did not give up her seat. Yet there is still much to be done. When I lived in Florida, I was dismayed at how much segregation exists and appalled that hate groups like the KKK are still active. I simply do not get how you can hate and hurt someone solely because of the colour of their skin or because they are different.

Thankfully, there are organizations helping to create understanding and sharing King’s vision. On this day in 1969, Mrs Coretta Scott King announced the creation of the The Martin Luther King, Jr. Center for Nonviolent Social Change (“The King Center“) in Atlanta. As founder Mrs King said, it’s “a living memorial filled with all the vitality that was his, a center of human endeavor, committed to the causes for which he lived and died.”

And there’s the Southern Poverty Law Center, a nonprofit civil rights organization founded in 1971. It continues to track and expose activities of hate groups and offers a Teaching Tolerance program and free resources.

Another inspiring group is

Life After Hate, co-founded by former racist skinheads, Christian Picciolini and Arno Michaels. They were pioneers in the skinhead movement in America. Now they’ve created this nonprofit organization dedicated to demonstrating and reinforcing basic human goodness. Two years ago on this day, they launched the first issue of their online e-magazine. Submissions are welcomed.

Life After Hate is also a member of the global Against Violent Extremism network.  This is a network of former violent extremists, survivors, activists and experts united by the mission to prevent violence.

Thank you Dr. King for igniting a dream and thanks to all the couragous souls who change reality. If a black man can lead a nation out of segregation and if  violent racists can become a voice for equality, what else is possible?