Mind the Gap – a way forward

I just spent a month in England, facilitating peacemaking circles trainings and public speaking. While in London riding the tube, we hear “Mind the Gap” whenever the doors to the train open. It got me reflecting on the gap between what is and what is possible.

I arrived home to the news of yet another police officer killing an unarmed black man with no accountability. It’s a visceral feeling of sickness knowing that police officer Daniel Pantaleo used a chokehold that’s been banned since 1993 captured on camera by a bystander in broad daylight. The New York chief medical examiner deemed this a homicide. And we can all watch the chilling murder take place before our eyes. Daniel Pantaleo walks away to continue his police job and Eric Garner is dead leaving his family to grieve and fend for themselves.

Mind the Gap – of the treatment of minorities

Unfortunately, this is but one case. The list of harms and injustices perpetrated against black people and other minorities is vast and long, spanning centuries.

Minorities are disproportionately arrested, imprisoned and put on death row. 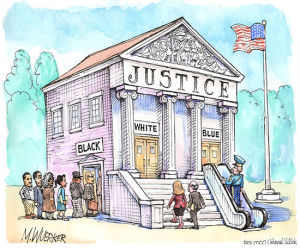 While blacks make up 13% of the population, according to FBI data, in 2012 of the 426 homicide victims killed by police, 32% were black. It is estimated that one in three black men will go to prison. As of 2013, 42% of prisoners on death row were black.

There are many reasons for all this, but such stats should serve as a wake up call to a crisis.

Mind the Gap – of justice

My life’s work is about creating a new reality. A first step is to acknowledge current realities and raise awareness. Social media is a powerful medium. Thousands of people are taking to the streets. We are experiencing a rising critical mass and heading toward a breaking point around social justice issues. Enough is enough. 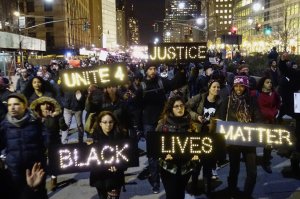 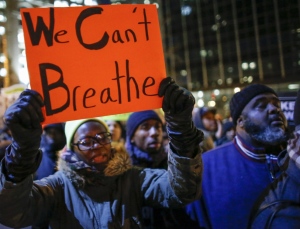 The criminal justice system, while a necessary institution, is limited and not the answer. We found that out yet again as justice was delivered through it’s legal process with letting officer Pantaleo go.

We have to understand that the justice system is set up within a particular framework – to determine legal guilt or innocence (never mind about the actual truth), through an adversarial process between professionals with the result of individuals either walking away if deemed innocent or being punished if deemed guilty (never mind about what the victims need or making amends through direct responsibility).

Albert Burneko argues that the justice system is not actually broken – it is doing what it is set up to do:

“This is America. It is not broken. It is doing what it does. America is a serial brutalizer of black and brown people. Brutalizing them is what it does. It does other things, too, yes, but brutalizing black and brown people is what it has done the most, and with the most zeal, and for the longest… America employs the enforcers of its power to beat, kill, and terrorize, deploys its judiciary to say that that’s OK, and has done this more times than anyone can hope to count. This is not a flaw in the design; this is the design.”

Even if this particular police officer would have been charged, it would not bring about the necessary change. As Fania Davis points out, “The problem goes far beyond the actions of any police officer or department. The problem is hundreds of years old, and it is one we must take on as a nation.”

Mind the Gap – of building a way forward

So what can we do to change this? We must directly engage with the issues and with each other. As the hashtag on twitter states, #BlackLivesMatter. Period.

And we must not perpetuate the ‘us-them’ framework. Like it or not, it’s just us. There is no ‘them’. There are no disposable people. All lives matter. Including brown, indigenous, gay, transgendered, female and so on.

Spectra, an afrofeminist writer and advocate, made a plea to white people not to ‘unfriend’ other white people for racism on Facebook, but rather to engage with them:

“I don’t need rash actions that absolve you of the responsibility of facilitating hard conversations with folks I will never be able to reach. I need you to step up in a major way, and leverage the connections you DO have to address ignorance with conversation and interrogate white privilege with compassion. Because I will not do this. I cannot do this. My rage as a black person witnessing yet another moment in the endless cycle of racism in the US prevents me from engaging in ‘level headed’ conversations… Speak up.”

Talking may seem inconsequential. Yet do not underestimate the power of true dialogue. I had a bumper sticker that read “Ignorance Rarely Survives Experience”. Once we engage and humanize one another, we can no longer so easily dismiss and harm each other. As a practitioner, I can attest to the power of peacemaking circles and restorative justice to hold people accountable, heal and transform lives.

Fania Davis, having much experience with racial violence and a civil rights lawyer, calls for a Truth and Reconciliation process on violence against African Americans. A process based on restorative values and principles offers an effective step forward on a long road to truth, healing and transformation. This is ongoing and collective work that we the people need to do:

“We must roll up our sleeves and do the messy, challenging, but hopeful work of creating transformed relationships and structures leading us into new futures.”

I overheard a white man talking to a black man on the tube in London:

“They’re not like our Bobbies. They’re armed. And will just as well shoot you. It’s madness!”

The train doors open and they step out as the woman’s voice over the speaker says, “Mind the Gap”….