Humanity in the face of Extremism

The rise of extremism and hate crimes is disturbing. How do we effectively respond? And in answering that, we need to consider: Who are we being? What reality would we like to create? 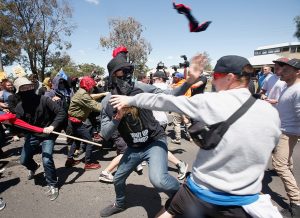 we mirror that which we wish to change – like hate and aggression – we ironically become more like them. We think we’re right and they’re wrong. While they, of course, think they’re right and we’re wrong. It becomes an endless loop of violence, us and them, right and wrong. Extremists, neo-Nazis, and the ‘alt-right’ thrive on violent opposition.

What’s beyond that and what else is possible?

We have at our disposal the most powerful tools and weapons to change the world. What could we choose that works, doesn’t compromise who we truly are, and expands consciousness?

Consider the power of connection, humour, creativity, kindness, non-judgement, dialogue… These are practical and effective.

* Daryl Davis, a black musician, befriends white supremacists. He asks: “How can you hate me when you don’t even know me?”

His unusual hobby yields a collection of robes and artifacts when they leave the KKK due to his friendship. A documentary has been made: Accidental Courtesy. “In an age of digital disconnection, Daryl’s method is rooted in personal interaction.”

* Watch this fabulous short video of former KKK leader Johnny Lee Clary talking about his encounters with Reverend Wade Watts. The power of humour is remarkable, as is the African American man who had the courage to wield it even in the face of violence.

Let’s also listen to the wisdom of former extremists who help others leave. A former neo-Nazi skinhead, Arno Michaelis, changed “because people demonstrated the courage and inner peace necessary to defy my hostility rather than reflect it…People who I had claimed to hate — a Jewish boss, a Lesbian supervisor, black and Latino co-workers — refused to lower themselves to my level, instead choosing to model the way that we human beings should treat each other.”

Hate wears many faces and has no borders. And we have many effective tools and ways to respond. Here is a great resource guide from the Southern Poverty Law Centre.

Peace of the Circle is creating a kinder, more peaceful reality for us all. We welcome collaboration and are happy to discuss facilitating and training opportunities around the world.

What could we create if we show humanity in the face of inhumanity?