The report of the independent review of the Vancouver Stanley Cup riot was released by co-chairs John Furlong and Douglas Keefe on Sept 1st. (http://www.pssg.gov.bc.ca/vancouverriotreview)

I commend Furlong and Keefe for including a section on justice and am thrilled restorative justice is acknowledged (p.119-123). It seems they took our submission, under the umbrella of the Vancouver Association for Restorative Justice, seriously!

Here is my summary of this section with quotes from their report.

On June 15, the downtown core became a “stadium” to about 155,000 people. By the end of the game, things quickly disintegrated into a full blown riot.

“A riot is an assault on the community. It attacks our trust, sense of security, community, dignity, and humanity.”

The morning after the riot, people from all over came downtown to help clean up the mess and to show support to those affected. 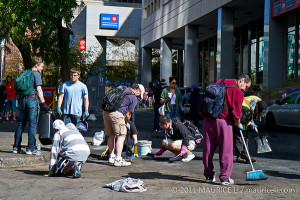 Furlong and Keefe dedicate their report “to those people who took back the streets”.

They became our heroes; “it was a rebuke to the instigators, a repudiation of those who cheered them on, and the symbolic reclamation of the public space.”

This community response is in itself a form of restorative justice.

The clean up and the review are part of a necessary process of restoration. What about the offenders?

“Riotous behavior of any sort cries out for justice… true justice fits the crime and the criminal. There were many different crimes and criminals that night…There should be a range of remedies.”

The criminal justice system is seen as too slow, too weak and, most importantly, too impersonal. “Accountability is most powerful when an individual fully understands the effects of their actions on other people”.

Restorative justice is attractive because “it can take many forms and is an approach to crime, not just a set of rules” and it is particularly “good at reaching the ones who still don’t have a clue of the harm they’ve done.”

Thankfully, the report helps dispel the misunderstanding that restorative justice is soft: “Far from being a slap on the wrist this is, for many, a deeply troubling experience. But it can also be a transforming experience.”

And it works: “a great deal of evidence that people who go through restorative justice are less likely to re-offend and that more victims of crime attain closure and have a higher level of satisfaction”.

I’m curious how the powers that be will respond. Will they listen to these words of wisdom:

“The community owes them nothing, but a wise community will offer them something – an opportunity to make amends.”